In addition to vintage ensembles, classy accessories, and distinctive tastes in pretty much everything, hipsters often rock the flashiest hairstyles to match their unique sense of style. Hipster haircut ideas hardly conform to just one or two hair trends. They combine the classic and sophisticated looks with edgy modern hair trends to create haircuts that are irresistibly good-looking.

Compared to other hairstyles, hipster haircut ideas are a lot more flexible and borrow from almost all types of hairstyles. Whether you prefer the edgy Mohawk, the gentlemanly pompadour, the stylish fohawk, or even a more subtle taper fade haircut, the hipster version is probably a lot better than what you would ordinarily get.

This pompadour hipster hairstyle is all about the right balance between soft edges and crisp lines. The styling of the hair on top is absolutely a show-stopper especially against the backdrop of the crisply razor-faded sides that merge excellently with the stubbly cheeks and jawline. Leaving the mustache on definitely adds some class to this look which is as suitable for formal occasions as it is for a casual everyday look.

Playing with the orientation of your side part can go a long way to enhance the final outcome of your haircut. This flashy fohawk gets its kick from the expert taper fade on the sides and the nicely styled locks on top. To add a little flair, the side part has been moved a little higher to create edgier contrasts between the curly locks on top and the faded sides. Leaving a nicely trimmed beard adds a tastefully macho touch to the excellent hipster hairstyle.

Even without going above and beyond, you can still pull off some pretty amazing hipster hairstyles. This is one of the low profile looks you can go for. All you need to do is throw in some sleek low razor fades at the sides to merge your hair with your beard via well-trimmed sideburns. If your beard grows a bit patchy at the cheeks, take this opportunity to give it a fade as well in order to achieve a neat casual look that would look just as good in a suit.

If you decide to go all out, this is the look you should be gunning for. The curly Mohawk is a look that takes a bit of gut to rock. It, however, looks especially good when paired with a nice thick beard with finely trimmed edges. The mustache finishes the look with a touch of sophistication that adds more character to the haircut.

Whether you like it formal or casual, this is a look every man should aspire to rock at least once in their lives. The hipster hairstyle brings together the class and sophistication of perfect side-swept locks with the edginess of sharply faded sides and a crisp side part to add some more creativity to the look. The disconnected beard is a great way to a bit more edginess to your look.

#6 Swept Back with Undercut

If you’re looking for uniqueness, leaving enough length towards the front allows you to casually sweep back your hair to create this stunning look. The undercut that has been used to shorten the sides contrasts perfectly with the blond locks and gives the look its edge. It also makes it possible to stylishly merge your hair with your neatly trimmed beard for a more polished finish.

#7 Slick Back with Skin Fade

For some men, a slick back can be too outlandish. Thankfully for those men, the hipster culture has provided them with this edgy slick back haircut. It combines the class of the usual swept-back top with the crisp edginess afforded by a nice middle taper fade which keeps the sides short and adds some pleasant contrasts to the look. If you’re not ready to give up your beard, disconnection will be enough to make the look perfect.

A clean-shaven face can be appealing, especially when paired with an exquisitely done pompadour haircut such as this. This youthful look is quite easy to achieve and maintain. The taper fade on the sides greatly enhances the appearance of the elegantly styled locks on top. This classy haircut is versatile enough to be casual and formal with ease.

Nothing can compare to the allure of a look that combines ruggedness and sophistication, which is why this is one of the most popular hipster haircuts out there. Combining a messy side part hairstyle with a nice, thick, grizzly beard creates some marvelous contrasts that can really work in your favor if you’re looking for something flashy but sophisticated all the same. The key to achieving this look is keeping that beard as long and as well-groomed as possible. Not all hipster hairstyles are over the top or excessive. Here is an example of a perfectly formal hipster hairstyle that features an elegantly styled short pompadour that is fairly even and neatly swept back. The only touch of edginess in this look comes from the slight stubble that lines the jawline, stylishly giving the face a more distinctive outline.

For a more vintage look, style your mustache in the classic handlebar fashion. It might seem eccentric but when paired with an excellently styled haircut with crisp fades at the sides and a nicely-trimmed beard, it adds flair to a look that is all too common.

The fohawk is a very versatile look that fits the bill for most people regardless of taste and style preferences. Instead of spikes or anything with wild textures, style the hair on top by slicking it backward to add some class to the look. For bearded men, the bald fade at the sides should create a sharp beard disconnect that really gives the look more spunk.

#16 Side Swept with Bangs

#33 Fade Haircut with Side Part 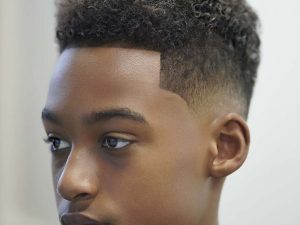